Amsterdam Airport Schiphol (Dutch: Luchthaven Schiphol, Dutch pronunciation: ) (IATA: AMS, ICAO: EHAM) is the main international airport of the Netherlands, located 4.9 nautical miles (9.1 km; 5.6 mi) southwest of Amsterdam, in the municipality of Haarlemmermeer, province of North Holland. It is the fifth busiest airport in Europe in terms of passengers. The airport is built as one large terminal (a single-terminal concept), split into three large departure halls.

Schiphol is the hub for KLM and its regional affiliate KLM Cityhopper as well as for Corendon Dutch Airlines, Martinair Cargo, Transavia and TUI Airlines Netherlands. The airport also serves as a European hub for Delta Air Lines and as a base for EasyJet and Vueling. 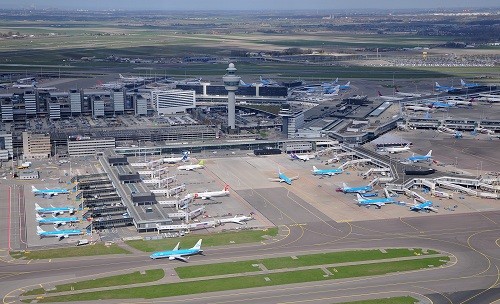